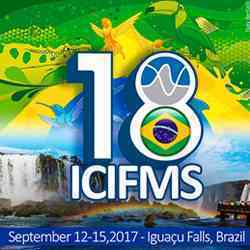 The 18th International Conference on Internal Friction and Mechanical Spectroscopy (ICIFMS-18) will be held on September 12-15, 2017, in Foz do Iguaçu (Iguazu Falls), Brazil, with the support of Universidade Estadual Paulista (UNESP) and Universidade Federal de São Carlos (UFSCar).

The ICIFMS-18 will be a great opportunity for the exchange of experience, innovative ideas and research results focused on the theory, advances and applications of internal friction and mechanical spectroscopy, dynamic-mechanical analysis, high damping materials and new techniques of internal friction and mechanical spectroscopy. The exchange of ideas and discussion make ICIFMS-18 an unmissable event.

The Conference program will consist of plenary lectures and invited lectures of the last significant discoveries and developments in all fields of mechanical spectroscopy and related fields. Abstracts submitted will be evaluated in relation to the quality and impact. The accepted abstracts will be assigned to the oral presentation and poster sessions, and will appear in the conference proceedings. The papers presented will be published as regular papers in a special issue of a scientific journal of impact factor.

In addition, we are preparing several social activities, because we believe that the good humor and a festive atmosphere helps in social interaction and in the formation of friendships and interpersonal relationships network, which greatly assists in the development of work and research and the exchange of experiences and knowledge among its members.